The county of Ostholstein

Welcome to the best part of Northern Germany!

The beautiful scenery of today’s district of Ostholstein, which has a total surface of 1392 square kilometres, was once characterised by wilderness. Its typical countryside is dominated by the hilly terminal moraine landscape with numerous hedgerows – free growing hedges –, lakes, game-rich forests and of course by the Baltic coast. In May, when the rape is in full blossom, Ostholstein seems to be a masterpiece in yellow.

The Baltic Coast and the region Holstein Switzerland

Ostholstein stands for the Baltic Coast and the region Holstein Switzerland. The Baltic Sea – this is endless beaches and the hustle and bustle on boardwalks and piers along the coast. Holstein Switzerland creates an excellent alternative to this vibrant beach life, thanks to its numerous hills, romantic lakes and forests, which already inspired several painters in the past. In Ostholstein, quality of lifeand quality of work can be ideally combined. Besides many interesting leisure facilities, cultural events do not miss out either: museums, cultural facilities, concerts and theatre performances, open air events on the beach and many festivities on different sites are well worth tobe visited. With its approximately 201 000 inhabitants, Ostholstein’s population density is relatively hiWhat are the tasks of a district? ». The highest location of the federal state Schleswig-Holstein – the „Bungsberg“ (Bungs hill) with about 168 metres above sea level – and the lowest location in the whole German interior land, –the „Hemmelsdorfer See“ (lake Hemmelsdorf) with 44 meters below sea level – are both located in the district of Ostholstein.

Furthermore, the district of Ostholstein has a highly developed infrastructure. The direct link between Germanyand Denmark – the part of the European route E 47 Lisbon/ Stockholm connecting Hamburg and Copenhagen–passes right through Ostholstein and is the shortest connection to Scandinavia. This major traffic pathway has considerably influenced the dynamic development of the district. It is for this reason, that a fixed direct link between Germany and Denmark is currently at the centre of attention. Besides the plans for a bridge or a tunnel to cross the Fehmarn Belt strait, the extension plans for the railway connection to Scandinavia within the Fehmarn-Belt projectare especially important for the municipalities between Lübeck and Puttgarden. The start of construction for the Fehmarn Belt Tunnel – which will be almost 20 kilometres long – is scheduled for 2013.

The county of Ostholstein - Facts »

What are the tasks of a district? »

For All Desires: Coastal Adventures As The Seasons Change » 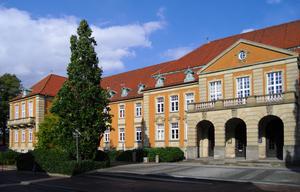